Skip to main content
Feature Your Organization on the Map

Although many individuals and families have returned home since the end of the war with ISIS in 2017, approximately 1.2 million people remain internally displaced. Of the total number of internally displaced, more than half sought refuge in the Kurdistan Region of Iraq (KRI), where HAI is active across several provinces. In the region, we focus on a number of areas, including supporting displaced people, minorities, and victims of trafficking, addressing violence against women, improving mental health infrastructure, and providing juveniles access to justice.

For nearly a decade, HAI has worked in the D.R. documenting and responding to the urgent needs and vulnerabilities of stateless populations and those at risk of statelessness. Working across 11 provinces, HAI provides legal and psychosocial services to help stateless individuals obtain nationality and reintegrate into Dominican society.

“I thank God that I was able to get my documents with the help of Heartland Alliance.” Said Anita, 24. “With those documents, I was able to register my youngest child as Dominican, and I was able to get insurance for both of us. I’m very happy because now I can afford doctors’ visits and medical tests because the insurance covers a big percentage.” More Information

In Colombia, HAI delivers sexual & reproductive health services directly to the people that need it most – vulnerable women and girls from Venezuela. More Information

Ensuring Migrants’ Rights in Colombia May 1, 2021

Survivor Voice: Rosalina, A Mother In Search Of Answers  October 23, 2020

“In 2012, my son disappeared. He was only 19 years old and his name was Martín. One woman told me she saw him walking between two men. After that, there were a lot of rumors – some people said they saw him around town, while others speculated he had been killed or was being held in the jungle. But today, several years since, I still don’t know what actually happened to my son.” In Colombia, there is a particularly long and bloody history of enforced disappearances with perpetrators continuing to evade justice. To amplify the voices of survivors impacted by such disappearances, Heartland Alliance International is highlighting Rosalina’s story of grief and hope. More Information

In Colombia, HAI delivers sexual & reproductive health services directly to the people that need it most – vulnerable women and girls from Venezuela. More Information 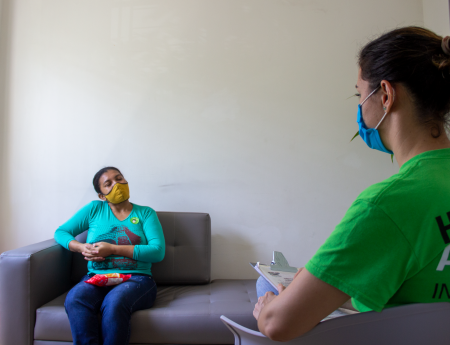